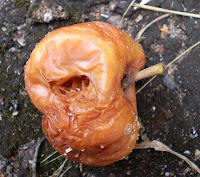 Loss is a rotten apple swallowed whole,
Worms and seeds and all
In one swift and painful gulp.
It cannot be recalled,
Not one way or the other;
The poisons enter the blood
Too quickly to be purged.
There is no other choice
But to plod onwards,
Eat your fill and take
What nourishment you can,
Perhaps building up
With each bitter, fetid bite,
An immunity to the pain,
A dam against the tears,
A morbid acquired taste
For the drug of sweet suffering,
And a stubborn determination
To put one foot in front of the other
Again and again and again.
So we eat our fill and fall
In this endless orchard of fruit
That decays with our touch,
For the loss is all we are.


Image credit: Kulmalukko, from Wikimedia Commons, under a Creative Commons License.
Posted by Unknown at 6:55 AM 1 comment:

Email ThisBlogThis!Share to TwitterShare to FacebookShare to Pinterest
Labels: poetry

Lullabies of the Abyss

Lullabies of the Abyss

Now lead me down to the abyss’s edge
And plunge me down into the cold dark depths,
Then set my silent, chilling corpse adrift
With this quick tide that sweeps from life to death.

Into the womb of chaos I shall come,
The primal birthing place of all we fear,
To hear the whispers of a babbling tongue
And drink the secrets of eternal tears.

Amidst the ghosts and shadows in my head,
The fading dreams long lost behind my eyes,
I sink into my heart, beneath the dead,
Afloat upon the murmured lullabies.

Image credit: Kaplanoah, from Wikimedia Commons, under a Creative Commons License.
Posted by Unknown at 6:37 AM No comments:

Email ThisBlogThis!Share to TwitterShare to FacebookShare to Pinterest
Labels: poetry 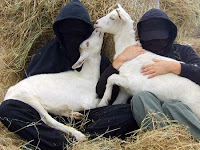 The Chronicle of Higher Education recently published an article on its website by Harold Fromm titled “Vegans and the Quest for Purity.” It was a poorly argued, logically flawed diatribe against vegans and veganism—which were criticized for being foolishly extremist, self-contradictory, impossible, and utterly valueless. The article touched off a large debate in the comments and on various other websites. In taking part in the discussion myself, I did a lot of thinking about issues that were raised, which speak to many of my core principles and, I think, also touch on some key questions of modern culture and human nature.

Whatever valid points Fromm might be making about purist veganism in his article, he is in fact writing in such a way to discredit ALL veganism—in contradistinction to “looser” (and so more acceptable) vegetarianism. What this essentially does is to put things in an all-or-nothing light, so that veganism in any form is cast as foolish and worthless. If we only think in ideal and absolutist terms, then yes, veganism becomes untenable. It would be impossible to draw absolute lines between what things could be eaten/used by us and what not, and it would sacrifice practical efficacy for unwavering rigidity.

But to portray any and all veganism as priggishly absolutist ignores the very real good that we can do by trying, as much as possible, to reduce the harm we cause for other beings through a vegan lifestyle. Why is this somehow foolish or worthy of ridicule? By adopting a vegan lifestyle, even without worrying about bacteria and insects but just the more obvious living creatures, vegans still do a great amount of good in the world (for animals, for the environment, for themselves...).

It makes me sad to have these efforts and intentions dismissed out of hand or mocked. I fear that Fromm may lead many people to disregard veganism completely rather than see what aspects of it actually are worthwhile and doable.

And yet, Fromm does actually get at a serious issue in criticizing self-righteous vegans who try to preach to the world and who cast critical judgment on anyone not as pure as themselves. But the root problem in this case is not veganism in the extreme, nor any particular “-ism.” The real problem is NOT one particular ideology or lifestyle choice…but the human tendency to get fundamental about our cherished beliefs. Be it religion, political ideology, racial identity, or even tastes in art, I cannot help but see a common underlying thread: Humans just love to get fanatical. The sad thing is that the minority of fanatics get noticed, while the majority of reasonable people in any “group” get lumped in with the extreme ends of their particular spectrum (e.g., “all Muslims are militant terrorists”).

The Crimes of Blindness 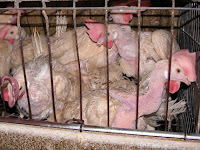 The Crimes of Blindness

Imagine, if you will, that you are standing in some sort of a packed cell with hundreds of others--some of them family members, some of them friends, and many of them strangers. They all, like you, are visibly trembling and unable to move, even losing control of their bladders or bowels.

You have lost track of time, but you must have been here a long while, because the place stinks--with urine, feces, sweat, and fear, forming an invisible fog that is still thick enough to choke you. You suffocate and fight to stay conscious, not knowing where you are or what is happening.

Suddenly, a door swings open, and blinding daylight floods the confining space. Huge dark figures, silhouettes of strange alien shapes, rush in and start grabbing others around you. Some great clashing sound screams into life, the sound of metal and motor engines deafening you as you cry out, one voice among many.

And then you feel yourself clutched by the leg, yanked forwards, and inverted. Dizzied, you try to orient yourself and gather your senses, but things are moving too quickly in this terrible place. Something cold and hard locks on to your ankle, and you are moving, swinging to and fro in the air as you go.

On either side of you, others in a similarly up-ended position form a long line, swaying in the air like clothes hung out to dry in the breeze. The ride is short and fast, through a crowd of those alien figures. You watch as one reaches up towards you quickly, and with a flashing swipe, you feel an icy sting on your throat.

You try to cry out at the pain, but strangely your lungs cannot take in air…and then the real terror starts. You squirm and writhe, the sting in your throat sharp still but dulling as everything starts to fade. Before your senses escape you, though, you feel the skin of your ankle rip open and pull away from the bone…and you slip through the clasping fixture, flopping to the hard, cold floor.

Laughter and angry grunts get louder as one of the alien figures approaches you. Yet again, you are grabbed (by the injured leg no less, the useless limb now throbbing from somewhere so far away), hoisted into the air…and then slammed repeatedly against the floor, over and over. You feel your skull and vertebrae crack; your ribs shatter and pierce your organs; your blood fills your throat and blurs your vision. And then, finally, it ends…blackness, silence, peace…

I hope you feel some horror at the image of human beings like yourself, and including yourself, enduring such unjust, senseless violation.

But how do you feel when I tell you that the victims are chickens, not people? For the scene I have described is not some torture chamber in a fantasy world, nor an account of brutality from the depths of some draconian prison, but just one of many scenarios in the very real, very frightful animal slaughterhouses to be found throughout the United States and many other countries.

And what if I tell you that my narrative is the G-rated version, lacking so much of the nauseating abuses that come before--such as confinement of anywhere from three to five (or more) birds in a tiny cage, in fetid air and disease-infested surroundings, with fighting and even cannibalism, and involving genetic manipulation and stunting of every single natural instinct (from stretching limbs to scratching the ground), and much more?