Green Books Campaign: Grey Owl and Me: Stories from the Trail and Beyond 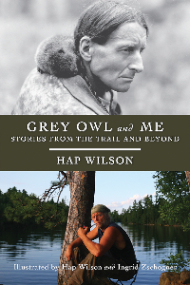 This review is part of the Green Books campaign. Today 200 bloggers take a stand to support books printed in an eco-friendly manner by simultaneously publishing reviews of 200 books printed on recycled or FSC-certified paper. By turning a spotlight on books printed using eco- friendly paper, we hope to raise the awareness of book buyers and encourage everyone to take the environment into consideration when purchasing books.

The campaign is organized for the second time by Eco-Libris, a green company working to make reading more sustainable. We invite you to join the discussion on "green" books and support books printed in an eco-friendly manner! A full list of participating blogs and links to their reviews is available on Eco-Libris website.

We civilized humans are a complicated lot. Whereas most other animals are intimately connected to, and immersed in, their natural habitat, most modern humans have “cultivated” ourselves right out of the natural world to a large degree. Now, we have to go “back into nature” to experience anything remotely like the conditions that our ancestors faced for the majority of our species’ history. But we can get glimpses of that environmental immersion when we plunge ourselves into nature--and sometimes we can do more than just glimpse it. Some of us actually live a large portion of their lives and build a large portion of their identity around a naturalized, “wild” way of life.

Of course, their lives are still pretty complicated in many ways as far as being “in” nature goes, especially if they try to bridge the gap between wild nature and civilization. Archie Belaney, an English-born Canadian who was known to the world as Grey Owl, is a prime example of such complexity. In his new book Grey Owl and Me: Stories from the Trail and Beyond, Hap Wilson, the Canadian adventurer, guide, conservationist, and writer, engages with the legacy of Grey Owl, who was and still is a crucial mentor for him through his writings on the Canadian wilderness and the need to preserve it. Published by Natural Heritage Books/Dundurn Press, and with illustrations by Wilson and Ingrid Zschogner, the collection of essays comprises a narrative adventure into their shared homeland that is both personal and graphic (in more ways than one!).


Wilson’s irreverent but thoughtful prose delves into the troubled history of Grey Owl, who constructed an identity and brand (of sorts) for himself as a white man who had “gone native” and become fully immersed in the Indian world, studying and practicing the ways of the Anishnabai peoples in the area known as Temagami. Grey Owl was a champion for wildlife like the beaver, the forest and other natural resources, and traditional ways that were characterized by harmony with nature. Yet he was also a heavy drinker, a distant father and husband (several times over), and a spinner of false tales about his own history and lifestyle. Once his true identity became known, it created a bit of a firestorm in Canada; but with time, he has come to be recognized as a “great Canadian” thanks to “his environmental work and poignant writing about the disappearing Canadian wilderness” (15).

And so it is that Grey Owl became sort of a tutelary spirit for Wilson as a boy, through his writings. Wilson admits, though, that “Archie Grey Owl was never my hero” and instead appealed to him for “the lifestyle he lived and … the places he’d been” (20). And Grey Owl remained a frequent, if not constant, presence for Wilson in his own (mis) adventures in the wilderness of Canada--and even other places such as New Zealand, as he recounts in one chapter of Grey Owl and Me. So while Wilson’s “ramblings may help to reveal or illustrate, or even justify, the rationale behind Archie’s troubled soul” (21), they also describe the crucial role that Grey Owl played in Wilson’s (equally complicated) life as a wilderness man.

The book does not follow any distinctive narrative thread, such as chronology, themes, or specific locations. As Wilson mentioned, they are “ramblings” indeed--or more correctly a collection of stories that are at once histories and explorations of important topics in one man’s life, touching at the same time on larger issues for the modern world. Thus we see Wilson collecting garbage, fighting seal hunters, riding his motorcycle on long journeys, tutoring Pierce Brosnan for a film about Grey Owl, and leading tourist families through all kinds of natural perils.

In all of these essays, and so in Wilson’s book as a whole, Grey Owl makes fleeting appearances at key moments. Many times Wilson will discuss some aspect of Grey Owl’s life and work that is relevant to the current moment in his discussion, such as his championing of forest-conservation measures in a time when the boreal forest is being devastated by logging. But just as often, Grey Owl appears and “speaks” to Wilson, admonishing or cajoling or laughing at him in fictionalized dialogues between the two characters of the tale. As Wilson says at one point after such an imaginary chat, he appeared and then “was gong again, as usual, showing up unexpectedly and leaving as if riding a breeze, tiptoeing stealthily through the shadows of my life as if still-hunting moose” (104).

This is, in fact, a good characterization of Grey Owl and Me in its entirely. While we do learn a lot about Archie Belaney/Grey Owl himself, he seems to be more in the background--or perhaps far in the distance, overlooking the stories in the book from atop a mountain or a canoe down the river. For the most part, Wilson’s essays are accounts of his own adventures, stories about (and personal investigations of) himself as a civilized wilderness man--or wild man in civilization.

Thus, to a great degree the book is a way for Wilson confront the identity he has made for himself, as Archie Belaney did, through his great love of the wilderness, his many journeys in the natural world, the lessons he learned by going into nature, and his extensive efforts both to speak out and take direct action for that natural world. And with his rough, rowdy, but also vivid and articulate style, Wilson creates some captivating tales as he wanders from place to place and topic to topic, at the same time always coming back to the bigger picture--how wildlife and resources are viewed and treated by modern society, how modern and traditional cultures interrelate and (may) inform each other, how the wilderness can teach us the ways to live a full, rich life.

Hap Wilson’s Grey Owl and Me, then, is best seen as an extended adventure under the guidance of one of Canada’s most famous wild men and environmental advocates. It can be frustrating or disappointing if one goes into it looking for tight organization or writing style, or if one expects the depth of philosophical profundity that can be found in some of today’s leading nature writers--such as Bill McKibben or Canada’s David Suzuki, to name just two. While it may be too specific to Canada for international readers, Wilson does speak well on issues that transcend boundaries and impact all of us. Further, his call to environmental consciousness is reflected in the very materials of his book, which is printed on materials from well-managed forests and approved by the Forest Stewardship Council.

That said, Grey Owl and Me can make for enjoyable reading for those of us who enjoy plunging into nature, reflecting on our relationship with the natural world, and doing our part to treat our environment with respect.