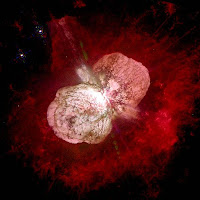 A crimson wave is breaking down
From shore to shore and pole to pole,
The blood of all our eons raining down
Upon our heads with drowning weight.

This ripple of a cosmic blast
Released from somewhere on the Earth,
The tragic triumph now achieved,
The monstrous birth of incapacity
And power blinded, driven mad with greed,
But trudging onwards over broken bones,
With every step approaching to the edge
Of its great shadow kingdom, built of dreams.

But as it teeters and begins to fall,
The empty human soul flings out a hand
In desperation for a solid hold:
Its fingers clutch and cling like claws
Onto the fabric of reality,
The weight of all the burdens it has borne,
Collected as the generations passed
And stored within its twisted genes.

The weight is far too great, and with a crash
The gauzy veil is split…then torn to shreds.
And as the stars collapse into the void,
They cluster, coalesce, and rush in waves
To fill the cosmos with a purging fire,
Extending outwards, far beyond the light,
Embracing everything to draw it in,
Consuming every shadow, scar, and stain.

With countless ages having passed again,
Their nights of darkness having found an end,
On some small planet lit by newborn stars,
A simple form will stir within the slime.

Image credit: NASA, public domain image from Wikimedia Commons.
Posted by Unknown at 7:37 AM No comments: